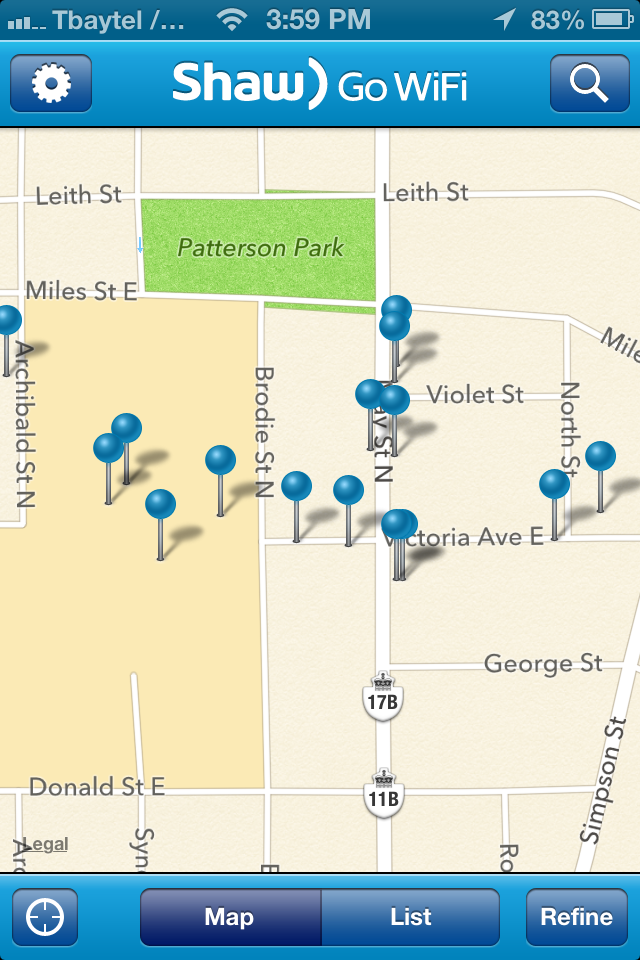 While staying in Kenora a couple of months ago, I was experiencing the typically bad Wifi Internet at my hotel when I noticed there was a new network appearing called ShawOpen. After a bit of searching I found out that Shaw is offering free Wifi to their existing customers. In Kenora, they have dozens of networks around the city as I discovered.

From Shaw’s website:
“As a Shaw Internet customer, you can access a huge network of super-fast Shaw Go WiFi zones all over your city for no additional cost. So you can stay connected, whether you’re sipping a latte, waiting for a train, or even changing at the gym. Once your device is registered, it will connect automatically whenever you’re in a Shaw Go WiFi zone.”

To get access there are a few steps required. You have to login to your Shaw account and add your devices so that you automatically connect thereafter and don’t have to authorize through any other process.

Back in Thunder Bay I noticed I was automatically connecting to another ShawOpen wifi network downtown Fort William and the speeds were great.

This is a great service to existing Shaw customers and allows you to save on your cellular data when travelling. They have many networks in Manitoba, Saskatchewan, Alberta and British Columbia. They also have an IOS App, but unfortunately it crashes and doesn’t work well (tested on iPhone 4 and 4s).

This trend doesn’t surprise me. Eventually Wifi coverage (or the next generation of wireless data) will blanket areas similar to how cellular coverage does now. The need for cellular voice and traditional text messaging will eventually be disappear as all communications from your smartphone will travel through regular data networks. Shaw is positioning themselves for this revolution, if you think about it someone with an iPod Touch (or tablet) with Skype (or iMessage, Google Talk, etc) can use it the same as a smartphone as long as they stay within one of Shaw’s Open Wifi hotspots.