Have you received a Facebook email with a friend request from someone you don’t know recently? I did, and I have all email notifications turned off for my personal Facebook profile. This is just the latest in a string of viruses and malware targetting social media sites. It is quite interesting the way that these virus makers are using social engineering to invade your computer. 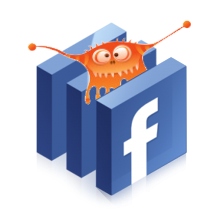 Here is what the email looked like coming in the form of a Facebook friend request by Sadi Khaleel another one I received recently was to Ahmed Qasem, Unais Alam, Safiyya Temiz and Mahdi Hassan. Not sure why they are using middle-eastern names, perhaps something to do with the turmoil over there. 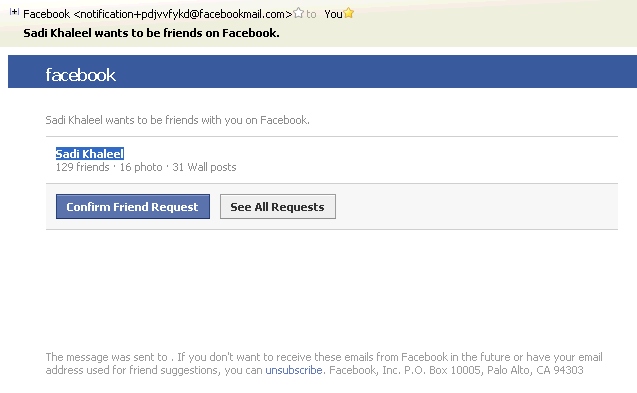 When I clicked on the link to confirm as a friend it took me to a page that looked exactly like Facebook, but there was a message saying I don’t have the most up to date version of the common “Macromedia” (Adobe) Flash Player. It is obvious by looking at the address bar that this site isn’t facebook, it is “downtohole.com”. The link for the Flash update will attempt to download an executable file called flashupdate.exe which I will assume is a virus of some sort (wasn’t going to try it and it would do very little on my Mac regardless). Here is the screenshot: 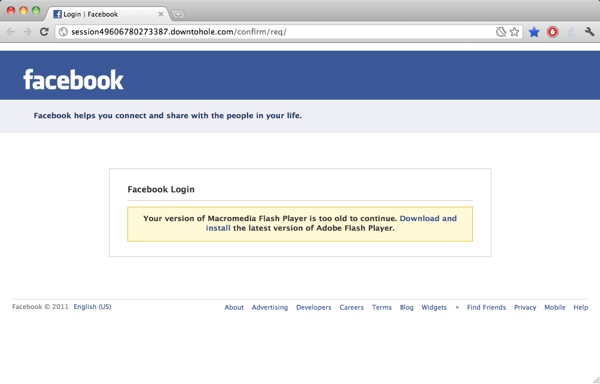 These virus makers are getting smarter on how they convince users to unknowingly install a virus on their computer. First by using a legitimate looking email coming from a legitimate source (Facebook). Second, using a web page that looks exactly like Facebook to convince users that they are on the real Facebook website. Thirdly, using a prompt to download the Macromedia Flash Player (even though it should be Adobe but most people who make it that far won’t realize this). Since Windows users see the Flash update every second time they turn on their computer it doesn’t seem too far fetched to click and update it. I will bet that this virus goes rampant in no time.

How to protect yourself? Simple, never follow links in email unless you can confirm the actual address the link lands on. In this case, go directly to Facebook, if you don’t see the friend request there then ignore it. These viruses have also showed themselves as notifications for Twitter, LinkedIn and other popular social media websites.

Thinking your anti-virus software will protect you? Don’t count on it. My opinion of most commercial anti-virus software is that they are completely useless. I haven’t encountered a computer with a virus that wasn’t running Symantec/Norton, MS Security Essentials, McAfee, etc. And yes it was up to date, same with Windows. The problem is most anti-virus software will protect against viruses but do nothing against spyware and malware. But, in my books this spyware has become so invasive it should be a virus and the good money spent to protect your computer should protect against spyware and malware too.

And the end of the day, the best virus protection is education. Being suspicious of emails, checking addresses, backing up regularly and exercising common sense (using Chrome or Firefox) will protect you far more than any anti-virus.