Over the past month the big 3 browser makers have released their newest versions. On March 8th Google’s Chrome version 10 was released, on March 14th Microsoft’s Internet Explorer 9 opened to the public (previously being available as a release candidate to those who wanted to test it) and on March 22nd, Mozilla’s Firefox 4 hit the Internet. The browser is hands down the most used piece of software on any computer and every day more and more software is going to the cloud. Internet Explorer still remains the most popular browser but its market share has dropped from just under 70% in 2008 to 45% today. Firefox is steady around 30% and Google Chrome is seing the largest increase and has about 15% of the market. 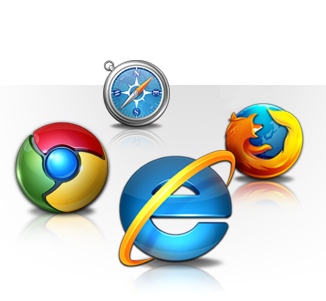 So which browser is best? The answer to put it simply is whatever you prefer. The newest versions of each browser have maximized speed, security and usability. The trend is moving towards a minimalist appearance and IE9 gives the user the most real estate for the web page (as long as you don’t install dozens of toolbars). Chrome has always tagged itself as the fastest but recent stats show that IE9 is performing better. Firefox has always been strong with standards and has an extensive library of extensions. Personally, I use Chrome on my Mac and Internet Explorer on my PCs (Firefox always annoyed me by updating whenever I start it up whereas Chrome updates in the background and IE updates with Windows Updates). IE has always had a poor security record and is the most targeted by spyware and viruses but a good anti-virus program and some common sense are all one requires to keep these bugs out. However, if you still use Windows XP, you will have to use Chrome or Firefox as Microsoft is not supporting it with version 9 of Internet Explorer.

All of these new browsers take advantage of HTML5 and have really done their homework to be the fastest they can be.

Here are some useful links for more reading: